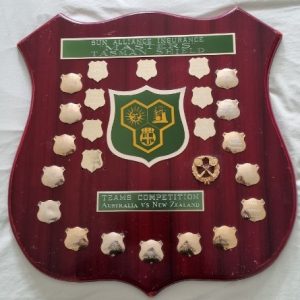 The Trans Tasman Series is conducted on a biennial basis where the the best Masters squash players from Australia and New Zealand compete for the Vic Belsham Trophy over a series of 3 tests.  Each team consists of 7 males and 7 females from the age groups of over 35 to over 65 years of age.

The next Trans Tasman Series will be hosted by Adelaide SA in October 2022.  Garry Irwin has been selected as the Australian Trans Tasman Test Team Manager.  The Australian team was announced on 8 April 2022 and is as follows:

With a blend of (10) seasoned representatives and (4) on debut (Steve, Shahroze, Peter and Joannah), this team will prove a mighty challenge to the New Zealand team when it is announced.

After the success of two unofficial tours by Australian Masters players to NZ in 1982 and 1983, a meeting, under the Chairmanship of the Australian Squash Rackets Association (ASRA) President, Mr Vic Belsham, was held in Brisbane on 28 April 1984 between the ASRA Executive and representatives of the New Zealand Squash Rackets Association (NZSRA) with the object of the meeting being to rationalise the program of events between the two countries going forward. An item on the Agenda was the question of an official Masters Teams Series between the two countries. It was agreed that the inaugural official Teams Series would commence with a visit by New Zealand to Australia in Sept 1984. The Series was conducted on the Gold Coast during the Australian Individual Championships at Southport.

There have been (24) Trans Tasman Series conducted since 1984 with Australia winning 20 and NZ 4.