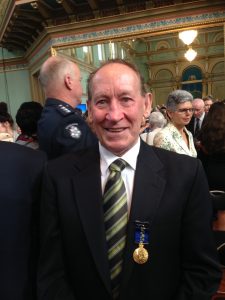 Peter has not only been a player but has been an active administrator in the sports of squash tennis and football for over 60 years.

In 2015 Peter was awarded an Order of Australia Medal for services to the sport of squash, tennis and football.  In the same year, Peter was also admitted to the Hall of Fame for Squash and Racquetball Victoria and was also awarded a Distinguished Lifetime Award to squash by Squash Australia.

In 2010 Peter received the Hans Ebeling award and in 2019 was awarded Legend Status of the Melbourne Cricket Club in recognition of the prominent role he has played administration and development of the MCC Squash Section since 1988.

In 2020 Peter was awarded Legend Status of Squash and Racquetball Victoria.

Peter has been involved in masters squash since its inception in 1980.  He was President of the VMSA in the early 80s and stood down when he became President of the AMSA in 1986, a position he still holds today.

Peter was the Championship Director for the 1995 and 2001 World Squash Titles and World Technical Director for 2009 World Masters Games. He was also on the Commonwealth Games Committee for squash in 2005

Whilst Peter is no longer able to play squash, he remains very active in the administration side of Masters Squash and his passion for masters squash is still as strong as ever.